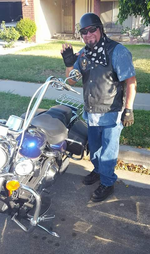 Frank Anthony Lopez was born in Los Angeles, California on May 2, 1957 to Jennie and Romulo Lopez. God took Frank to his heavenly home on June 16, 2020 in Fontana, California.

Frank is survived by his wife of 29 years, Susan Alvarez Lopez. They resided in Fontana for their entire marriage. He is survived by three children, Aja Lopez, Jennifer Deves and Adam Lopez. He was blessed with seven grandchildren, Gavin, Elizabeth, Abigail, Aubrey, Kaden, Dylan, and Emily.

Frank graduated from La Puente High School where he lettered in football. He retired last year from Ventura Foods after 40 years of service. He was a proud member of Teamster Local 630. Frank attended Water of Life Community Church, loved camping, fishing and hiking. He made it to the summit of Mt. Whitney two times. Frank loved the feeling of freedom and adventure he experienced while riding his cobalt blue Harley Davidson Roadking with friends and especially his son. He loved the many dogs he was able to raise over the years. Frank’s favorite role was that of loving grandpa to his seven grandchildren. Each one was his favorite!

Frank was the most giving and forgiving man you would ever meet. He rededicated his life to God months before his passing. While we know Frank is in his heavenly resting place, he will be greatly missed by his earthly family and friends.

His son Adam says it best:
“While we end having to go our separate ways,
I believe we will see you at the end of days.
While your body and your spirit may be gone,
your story and your essence live on and on...”