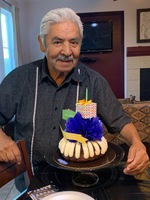 “At the end of life we will not be judged by how many diplomas we have received, how much money we have made, how many great things we have done.
We will be judged by "I was hungry, and you gave me something to eat, I was naked and you clothed me. I was homeless, and you took me in.”
― Mother Teresa

Jesus R. Rodríguez was a man of few words. He was a kind, passive and gentle spirit. He was Jesse to his wife, Papi to his children and grandchildren, Chuche to his family, “amigo” to so many, and “muy amable” to everyone he crossed paths with.
Jesus was born on October 21, 1943 in Angamacutiro, Michoacán, México to Jesus and Juana Rodríguez.

Papi’s story, like most, is rich in history that started with very humble beginnings and hardships at such an early age. These events would shape his prospective of life and place value on what mattered most. Sharing a chronology of events with dates will only give you a historical view so instead I’ll share a few highlights of what mattered most to Papi and in doing this, you’ll know his heart.

Jesse’s wife: Mary and Jesse walked along side each other for more than 45 years. Their mantra was simple: God, children, family, and friends. Together they built a life that was measured by the strength of their unity and bond within their family. They were like-minded in values; both wanting to work hard to build their home, raise God-fearing children with a Biblical foundation, and create a life rich in love. If you ask his wife, Mary would say Jesse was a faithful husband who was fully committed to his family. He wasn’t afraid of hard work and provided for their family by the sweat of his brow. Jesse’s passive nature gave Mary permission to “hold the reins” while his gentle wisdom knew exactly when to lightly tug them to the left or the right. What made him Mary’s perfect companion was that he understood her. Jesse’s love for Mary allowed her to be fully herself. He knew how to laugh and shake his head at her antics, making him all the more “a good husband”.

Papi’s children: Papi was the proud father to five children; James, Juanita, Jessica, Marcos and Elizabeth. He loved his children equally and differently. Papi’s acts of love were distinct to each of his children because they were all so uniquely different. For Jim, Dad’s acts of love came in the form of mentor and friend. Dad took his eldest son “Jimmito” to work a 3 color press machine at the printing press he worked at; planting the seeds of hard work in Jim. Later in life, Dad and Jim spent so much time sitting together on weekends talking out their “every days” and laughing together. For Juanita, Dad’s acts of love were manifested with the “gift of gab”. Dad shared stories of his pueblo or his memories of her as a child with Juanita. The two of them enjoyed their “tazitas de café” and catching up on all the family news. For Jessica, Papi’s acts of love was shown in the form of a buddy. Papi always made his “Jesusita” feel like she was special; not just because she was named after him but because he never let her get “lost in the shuffle” as the middle child. They shared a pact that he would bring her the secret king sized candy bar on pay day. Papi and Jessica enjoyed simple things together like working on their backyard and arguing over who gets to cut the grass. For Marcos, Papi’s acts of love were illustrated in the form of pampering. Mark was Papi’s “Frijolito”, his little prince, his youngest son. Papi liked to build a thrown-like tower of pillows for Mark to sit on so he could watch his favorite tv shows while he ate whatever Papi cooked him. Throughout Mark’s life, Papi always displayed a gentle love toward Mark, his baby boy. For Elizabeth, Papi’s acts of love revealed itself in the form of “daddy’s little girl”. Papi loved his wildly, curly haired baby. Liz was the surprise baby that Papi raised to love adventures in the backyard; his barefoot, little girl who he always made sure had a bunny companion. He built her a wooden play house and picnic table so he could watch her play. Papi was Liz’ only friend growing up because she came later in life but he worked hard at never letting her feel alone.

You might have known him by Grandpa, Uncle Jesse, Chuche or Jesse. He often used his words sparingly but that was never his primary form of communication. He communicated in action and deed. Regardless of what you knew him as, I’m certain you experienced his kindness, friendship and love. It flowed out of him because that’s what was in him.
On Thursday, January 14, 2021 at 7:54 am, Papi went home to heaven. We are saddened that we have to let Papi go ahead of us. It feels too soon but we know God has the last say…and so we accept His will for him.

To honor Papi, visitation hours will be 8 am to 9:30am at Ingold Funeral & Cremation in Fontana, with a funeral mass beginning at 10 am at St. John XXII Catholic Church in Fontana, followed by interment at Forest Lawn Memorial Park in Covina on Tuesday, January 26, 2021 (on what would have been Mark’s 41st birthday).
Due to the pandemic, masks will be required to attend services and we will be unable to host a gathering after.