To share your memory on the wall of Robert Hardley, sign in using one of the following options:

Robert attended Bell High School and graduated in... Read More
Robert Frank Hardley, 88 years old, of Banning CA, passed away on January 22, 2019 in Banning. He was born to Frank Joe Hardley and Ethel Carol Hardley on May 20, 1930 in Los Angeles, CA.

Robert attended Bell High School and graduated in June 1948. He enlisted in the US Army that same year and served overseas in Japan during the latter part of the Korean War. While in Japan and working as a chaplain’s assistant in Yokohama, Robert met his future wife, Utako (Taiko) Fujita, who was a Japanese-English translator working for the Army, and they married in Dec 1951. Robert attained the rank of Corporal in the Army, earned the Army Occupation Medal (Japan), the Korean Service Medal, and the UN Service Medal, and was honorably discharged from the Army in August 1952.

Robert and Utako were Christians and subsequently became missionaries and worked in the mission field in Japan and Okinawa from 1954 till 1965. After leaving missionary work, Robert began his life-long career as a Machinist. He also continued his education, attending various colleges and then earning his Associates Degree in June 1976 from Citrus College in Azusa, CA. He also earned California State Teaching Credentials and taught Machine Tool Technology classes at Chaffey Community College for 3 years.

Robert and Taiko were married for 40 years, raising a family of 3 children, but their marriage alas ended after their retirement. Robert most recently was residing in assisted care facilities in Yucaipa and Banning, and he was a member of the Canaan Church in Banning for the past 6 months. Robert enjoyed hobbies of reading, singing, stamp collecting, and learning new languages.

Robert is lovingly survived by his children Paul Hardley, Stephen Hardley and Deborah Hardley Griffen (and their spouses and partners), his 7 grandchildren (Alex, Andrew & Audrey, David & Stephanie, Nichole & Danielle), his 2 great-grandchildren (Freyja & Rowan), his sister-in-law Diana Hardley and many nieces and nephews and cousins. He is preceded in death by his brother Edward Hardley (09/28/2018), former spouse Utako Hardley (06/03/2004), mother Ethel Hardley (03/15/1993) and father Frank Hardley (03/02/1980).

A pavilion service will be held at 11:30am, Wednesday, February 6, 2019 at Riverside National Cemetery, 22495 Van Buren Blvd, Riverside CA 92518.
Military Honors will be rendered and the flag presented to his daughter Deborah. Robert will be laid to rest with his fellow brothers and sisters of the armed forces.
Read Less

To send flowers to the family or plant a tree in memory of Robert Frank Hardley, please visit our Heartfelt Sympathies Store.

Receive notifications about information and event scheduling for Robert

We encourage you to share your most beloved memories of Robert here, so that the family and other loved ones can always see it. You can upload cherished photographs, or share your favorite stories, and can even comment on those shared by others. 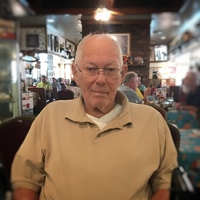 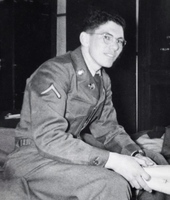 Robert as a young corporal in the US Army 1949 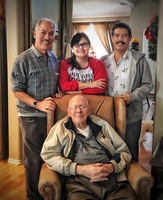 Robert’s last Family Christmas with his children..Paul, Stephen & Deborah..Dec 2018.
3
4
Add Photos
Upload up to 10 images at a time, max 8MB each